This is one of the events we most look forward to all year. Follow along as we go fishing with CUTE Girls!! This is the 2nd annual Girls fishing trip we have been involved with and it is an awesome event. It is important to us at Nimrod Outdoor to get the Kids and Youth involved in the Outdoors and teach them that there is a life outside. What a fun evening we had with this young ladies as some of them learned to bait a hook, how to get their fish off the hook and release it back into the water.
What are you involved in that helps get the kids and youth outdoors?
www.beanimrod.com
Posted by Nimrod Outdoors at 7:20 AM No comments:

Take a second before you start work today and enjoy our latest scouting trip as we try to find some bucks for Jake and Joe to get after once the season starts. Dont forget to subscribe!!
www.beanimrod.com
Posted by Nimrod Outdoors at 6:51 AM No comments:

Great day spent out Scouting with Nimrod Outdoors. We get some bulls spotted and get some trail cams set in hopes of getting some great pics and videos.
www.beanimrod.com
Posted by Nimrod Outdoors at 8:05 AM No comments:

Here is Part 2 of our podcast with "The Novice Hunter" Set back, enjoy and let us know what you think.
www.beanimrod.com
Posted by Nimrod Outdoors at 1:14 PM No comments:

Awesome Podcast with "The Novice Hunter". We talk about Youth in the outdoors and about scouting, glassing and many more things. Give it a listen and let us know what you do to get young and new people involved in Hunting and the Outdoors.
www.beanimrod.com
Posted by Nimrod Outdoors at 8:03 AM No comments:


Come along as I head out to fill my Turkey tag and hopefully dont have my son
Little Joe show me up!!
www.beanimrod.com
Posted by Nimrod Outdoors at 7:10 AM No comments:

Join us in our 1st outing as we search for a Bull Moose. We will be chronicling all our adventures in the "Year Of The Moose" so make sure to subscribe so you don't miss any of the adventures as we work to fill this Once in a Lifetime tag!!


Posted by Nimrod Outdoors at 6:49 AM No comments:

Weekend at the Ranch - Nimrod Outdoors

Join us as we spend the weekend on the ranch in NV doing what ranchers do.

Its not always fun and game, sometimes we have to work, but we do manage to get in a little shed hunting!!


Posted by Nimrod Outdoors at 9:09 AM No comments:

While the doldrums of winter raged on, one day was made much brighter by my son Joseph. He came to me one day and said “Dad, let’s put in for a Turkey Tag”. We had never hunted turkeys before so….. Why not!!! It was something we could do to get out in the hills during the spring and give us a little break from our Shed Hunting.

Being complete novices to the turkey hunting scene I didn’t give much thought to it after we had put in for the draw. That is until I got the email confirmation that said “Successful”. Not only did Little Joe draw but I did as well. All the sudden we realized we had a lot of work to do. We had no idea what we were doing. Where do we go? How do we hunt them? How do we call? What are the habits of turkeys? We were totally clueless!!

We began our study of turkey. We talked to lots of people, read a lot of articles and watched a lot of YouTube videos. We were starting to gather a lot of information and man… having never hunted them before, I had no idea how crazy these birds were. From what we could tell, they are a lot like a big bull elk during the rut. They strut around making lots of noise and chase the girls, this is something we can work with.

As the days rolled on and the opener got closer we continued to learn. We went out scouting and located some turkeys, we talked to the biologists and game wardens from the Utah DWR and put together a great game plan.  We returned to our spot the evening before the opener to do some final scouting. The birds were out just like expected and there were a couple great Toms in the group. The wind was blowing so hard we were not able to get our blind set up for opening morning.

Opening morning came early. We made our way out to our predesigned spot. We were in a great position and as the pre sun dawn started to make its way up into the sky we could hear the turkeys starting to make some noise.  We got set up quickly with our decoys hoping to pull the turkeys off the roost in our direction.  As we waited for the sun and as the light continued to get brighter we could see the turkeys in their roost and they were starting to wake.

As our luck would have it, the turkeys would come out of their roost and head in a completely opposite direction. We set there trying to call them back (not really knowing what we were doing) and mostly just stared at each other as the decoys. After a while we realized the turkeys were not coming our direction. We made a game plan and decided to try a little spot and stalk/ run and gun method. We had no idea if it would work or not.

From where we set up, we could see the birds out in the far parts of the field. We left Jacob and Jace there, and Joe and I made our way through some great cover over to where we had seen the turkeys in the field.  We got set up in a great location and were ready to start some calling when we noticed a guy walking up through the field.   “What was he doing”!!!!! Well it didn’t really matter, because his crazy idea actually worked to perfection, for us. The birds started to make their way out of the field and right towards us. Little Joe was getting excited and it was all going to play out perfectly. We had to move just a little to adjust to the course of the turkeys and as we got set up and ready to put the hammer down on a bird, a shot rang out. As it often happens on public ground, someone else had made the same move we had and beat us to the trigger. As the shot went off, birds went everywhere. One small Jake came flying by us at what seemed like 100 MPH. Little Joe took a shot at the Jake and missed and that would be the end of the morning hunt. Joe was so upset and unhappy. The other hunter had got his bird and Joe was left out in the cold with a missed shot. I could tell that he was disappointed so I tried to talk to him and ease the sting.

We headed back to the car to regroup and make a plan. We went up the road a ways and then hiked back into a drainage we knew the birds had gone into after the shots, in hopes of cutting them off.  We didn’t get back into the turkeys so we continued the hike and it turned into a midday shed hunting trip. It paid off as we picked up a few horns and got Joeys mind off the morning hunt.

We decided to set up or decoys where the birds had gone out that morning, as all heck broke loose, in hopes to get them coming back into the field for the evening. We were there well before the birds would come in and most of us took a little nap after our long shed hunting hike. We had been there for about an hour and a half when I thought I heard a gobble. We listened quietly but couldn’t confirm. About a half hour later Joey though he heard a gobble, again no actual confirmation. We waited patiently and about 20 minutes later I DID hear a gobble but it was all wrong. It wasn’t coming from where it was supposed to. It was coming from the other side of the field when we had been set up at first light that morning.

Again Joe and I made a run and gun effort to get over to the other side of the field and set up before the birds started coming out. We got to our position and get set up and waited. It wasn’t long when I saw movement coming through the sage brush. We pulled up the binos and could see a group of Jakes making their way through the sage toward the fields. At the same time we heard the gobble again and it wasn’t with the Jakes, it was coming from our right and getting closer, and the Jakes were right in front of us.  The course the turkeys were on was going to put us in a really bad and exposed spot.  We watched closely and decided we were going to have to move but it was going to have to be done very carefully.

We crawled on our hands and knees through the sage brush to get around the back side of the bushes. The plan worked, and we were able to get to some good cover. I popped my head up above the brush to see if the Jakes were still coming in. They were, but that was not what got me excited!! The Tom was right there in front of us. It saw me at the same time I saw it, and it was deciding to get the heck out of there. I popped up to full height and said “Joe, its right there, get it”!!!! Joe popped up and got his bead and BAM!!!! The big Tom hit the ground hard. It was all over and it happened so fast!!!!

We took some time to take pics and video and check out this awesome bird. Little Joe had just killed the biggest Tom we have seen in this area. He was so excited. I took a second to remind him how happy he was now was just because he missed that morning. We were setting there talking and telling Jake and Jace (Who had stayed back at our original setup) how it had all played out when Jacob said, “Now what do we do with it”? We had taken the time to learn how to hunt them but not how to take care of a bird if we got one. I looked at them and said “YouTube” LOL 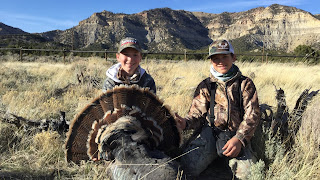 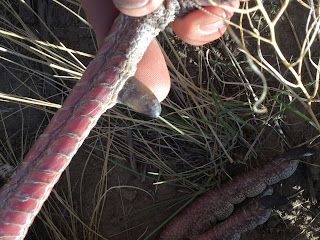 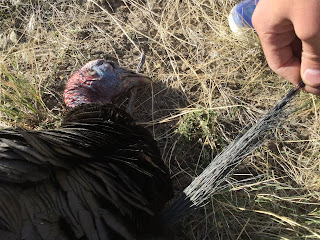 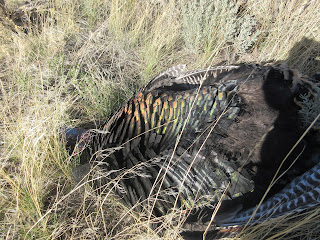 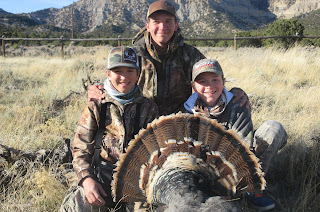 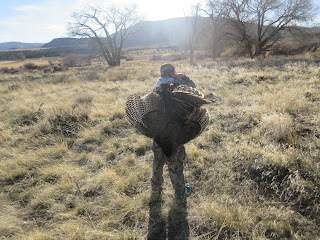 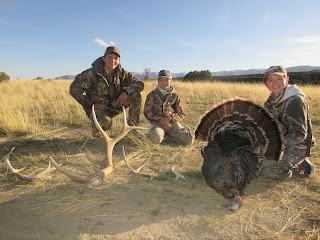 Posted by Nimrod Outdoors at 8:50 AM No comments: